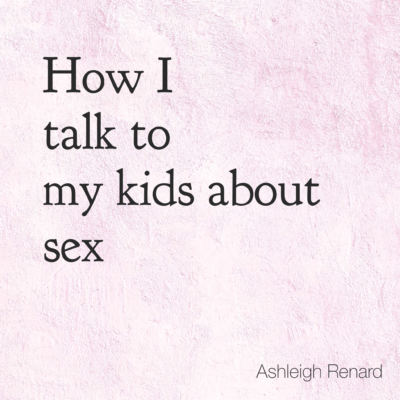 I always thought I would have zero nervousness talking to my kids about sex. But, by the time my oldest were three and five, I felt the awkwardness kick in and I knew I needed to start the conversation ASAP. I wanted to start them off with information that would lead them to a healthy, positive understanding of sex and be informed enough to know when they or someone they knew was in a situation that was not okay. I never thought of it as “the talk” or a one-time occurrence. I wanted it to be an ongoing conversation and I wanted to get it started. Luckily (not for our chickens) our first flock of chickens had recently been visited by our local fox. My boys were devastated, so I explained to them the circle of life, letting them know the foxes needed food for their babies. This made them very sympathetic to the fox family (and maybe more loyal to the foxes than the chickens). A few weeks later I asked, “Hey, do you remember how I told you the fox family had to feed their babies? Well, here is how foxes make babies…” See, I was already a little skittish about talking about a human penis in a human vagina, but a fox penis in a fox vagina? No problem. And then I told them everything and got them to repeat back to me the critical components “penis, vagina, sperm, egg, baby, okay?” I quizzed them on it for a few weeks before telling them, “You know the way baby foxes are made? Human babies are made the same way.” No big deal, nodding. Then Jack says, “Wait, I’ve never seen you and dad do that before. Where do you do that, like in the closet after we go to bed?” And so it began, curious questions from them, (sometimes awkward) answers from me. But, I’d rather have awkward answers coming from me than incorrect or unhealthy information coming from others. Over the years the conversations have continued to the point that they (12, 10, and 6 now) understand that just because a sperm and egg meet doesn’t mean it will implant and grow into a baby. It’s the potential for a baby. Also, they can tell you how IVF and IUI work, as well as when in a menstrual cycle ovulation usually occurs. They know trying to make a baby is complicated, but trying to prevent it is simple; don’t put sperm where an egg may be. They also know that more common than sex for the purpose of intentionally creating a pregnancy, it’s used for enjoyment and connection in a healthy adult relationship. And thankfully, we are all at the point where we can admit this has nothing do to with foxes.