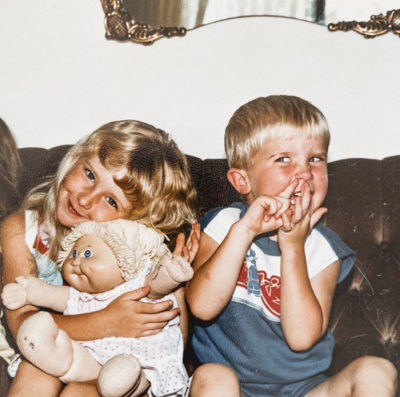 In this photo he is but a boy. In this story he rises to level of hero.
I have had many spiritual experiences in my life. Only one has taken place in a church.
When I was 17, I was at my twin cousins’ christening and I was hung over. I sat next to my brother, Alex, who, indisputably, possesses the weakest stomach in our family, and maybe even the world. If you said the word “booger,” he would gag. If there was anything subtly gross or if he exerted himself, as in hockey, he would barf profusely.
Once, he up-chucked through the cage on his hockey helmet and my parents could not get it to cease to smell like pepperoni pizza for the rest of the season.
At some point in the service honoring the sweet cherubs, my mouth started to water, the surefire sign that I was going to vomit. I looked around, trying to figure out which direction to go to get to a trashcan or toilet expediently, but there was no escape. We were sitting too close to the altar and the puke was coming quickly. If I would have tried to get there I would have certainly thrown up on the floor, causing a scene, disrupting the service, and horrifying everyone in attendance.
Alex sensed my discomfort and looked toward me. His eyes filled with understanding and dread when he saw, even through my teenage, poorly-matched foundation, that I was turning greener by the second. He continued to watch in horror as I pressed my fingers to my lips, let my mouth fill up with vomit, cheeks full as a chipmunk, and swallowed it back down, once, twice, three times. Our mom, who was tasked with video taping, looked toward us with a smile, as if to say, “Isn’t this precious?” She then looked back at the cooing, drooling babes up front. But, they weren’t the only ones drooling. Alex shakily handed me his program to wipe the dribble off my face. Since then, the doctors have verified what he has always insisted, that he cannot help his weak stomach. It’s because of an anatomical issue, a missing valve. There is only one word to describe his ability to control his physiological tendencies in order to prevent me from being grounded that day. Transcendent.